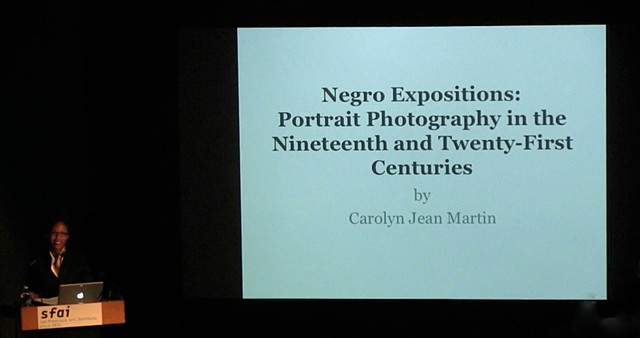 What are the contemporary cultural implications of a photographic exhibition that displays only well-known Black Americans similar in pose and social class? Through close readings of two exhibitions rooted in the conventions of formal portrait photography -- the American Negro Exhibit at the 1900 Paris Exposition, curated by W.E.B. Du Bois, and The Black List: Photographs by Timothy Greenfield-Sanders, shown at the Smithsonian National Portrait Gallery in 2011-12 -- I argue that the visual conventions of portrait photography as a function of pose and frame connect with the visual conventions of photographic exhibition space as a function of authority and selectivity to deliver a calculated image of the Black American directly to Whites and Blacks in response to their shared complex history in the United States.

The exhibitions feature portrait photography that although separated by decades demonstrates responsiveness to W.E.B. Du Bois’s construction of class and identity, brought forth within his early concept of the “Talented Tenth.” Examined through the lens of Du Bois’s ideals, these exhibits map a timeline connecting strikingly similar celebratory portrayals of Black Americans cloaked in the signifiers of education and class-consciousness.

A close examination of an exhibit in 1900 that, quite necessarily, only displays the best and brightest individuals, followed up by an exhibit in 2011 that, while highlighting a similar trope, becomes mired in reductive visual representations, draws attention to contemporary responses and the constant reconstruction of Black American identity through the use of portrait photography.